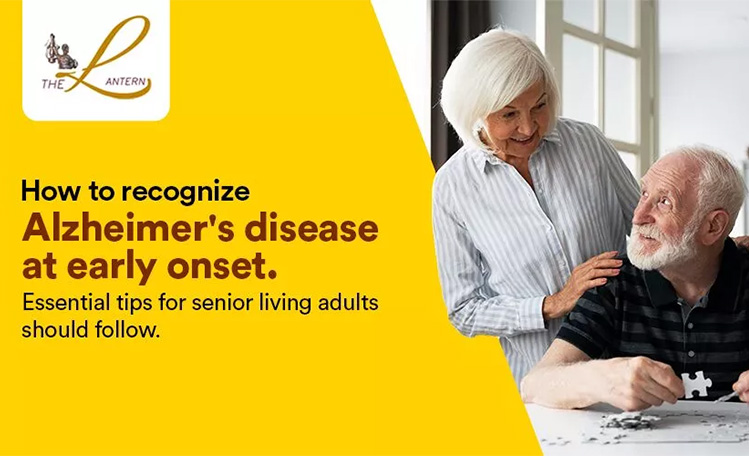 How to Recognize Alzheimer’s Disease at Early Onset: Essential Tips for Senior Living Citizens Should Follow

As in any kind of disease, the key to delaying, if not completely stopping, Alzheimer’s disease is through proactive prevention. However, it’s difficult to ascertain the necessary steps to take without a proper diagnosis. That being said, we cannot emphasize the importance of a proper diagnosis more, as a misdiagnosis of Alzheimer’s disease can be equally harmful to anyone.

How do most caregivers, particularly those who work in a senior community, recognize the onset of the said condition among their older clients? That shall be the main point of discussion in this post.

Why Is It Hard to Pinpoint Alzheimer’s Disease Early On?

For all the terrible effects of Alzheimer’s on the mind, it’s certainly better to confirm its presence just as it’s beginning, right? Well, that’s one of the reasons why dementia and Alzheimer’s continue to be on an uptrend worldwide

Why is this the case? One of the main hurdles is its rate/nature of progression. It becomes tricky because they start slowly and the signs may not immediately point to the condition. It could be because there’s only a single sign (e.g. acute instances of poor memory) or the signs appear sporadically.

Another reason is that many people associate the symptoms of Alzheimer’s with mere signs of “aging”. After all, it’s natural for people to start forgetting things more frequently as they age.

For most people, the most effective course of action is to seek professional help. This is primarily an official diagnosis from a doctor. The person will have to undergo different kinds of tests related to memory and thinking, including a brain scan, an MRI, or cerebrospinal fluid analysis. All these tests will be done to rule out possible brain impairments.

Whether it’s early-onset or “standard” Alzheimer’s disease, both these conditions share a lot of symptoms. Many of the signs we’ve included here are confirmed by doctors. Some are anecdotes shared by people who have had relatives that are later confirmed by a valid diagnosis.

Others come from first-hand accounts from local caretakers working in Madison assisted living communities. Most of these signs present themselves early, leading to a diagnosis.

A lot of family members report their parents or siblings showing this as one of the earliest signs. This is confirmed as well since it’s closely tied to a common symptom, namely memory impairment. It usually manifests itself with the person repeating a story he or she has told numerous times already and usually does so consistently.

Of course, that’s just one instance. Memory loss may present itself in other ways, after all.

This is one of the more challenging issues that someone with progressing Alzheimer’s has to contend with. This could only make life harder for him or her down the road, especially if no intervention is done. After all, it’s already a sign that impacts the way you do your day-to-day activities.

Depression, as a whole, remains connected to Alzheimer’s disease and other forms of dementia. It may be hard to ensure whether it’s a result of the condition or the reason for it. Still, it’s important to acknowledge the fact that it’s one of the most common first symptoms of these types of conditions.

These examples serve as one of the clear testaments of another common symptom of Alzheimer’s: a noticeable change in personality accompanied by mood swings. It becomes a challenge to diagnose it if it’s the sole sign that the person is showing since these changes are also tied to depression.

Loss of sense of taste or smell

Also known as anosmia, it’s a confirmed early sign of Alzheimer’s disease. Of course, you’re probably already aware of how tricky this symptom can be. For one, a whole slew of other conditions are associated with anosmia, not least of which is COVID-19. Even so, doctors do consider it as a main symptom mainly because it’s a sure sign of the presence of cognitive impairment.

Last but not least is an evident decline in decision-making and judgment, which, in turn, often leads to committing mistakes more regularly. This is especially true if the person didn’t show this kind of behavior before. You may notice it more if you pay attention to the individual’s day-to-day activities.

Alzheimer’s disease may be difficult to diagnose given its nature. Nonetheless, preemptive steps can be taken by anyone who is showing one or more of the signs mentioned here should slow progression. Literally, years and decades of life and quality of life can be saved if people take action now. This is why you shouldn’t delay speaking to a doctor if you or a loved one starts experiencing them.