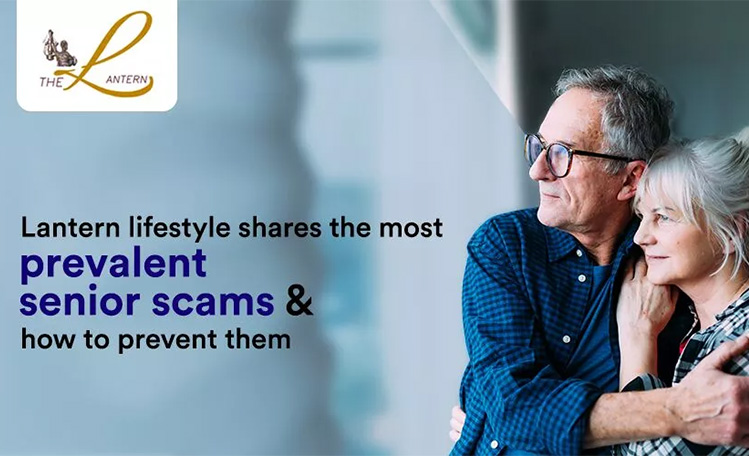 Lantern Lifestyle recently discussed the most common scams to increase awareness about their nature and prevention. The discussion was held in the Lounge at the Lantern of Saybrook and was led by Jean, founder, and CEO of the Lantern group. These scams vary a lot, and they are as follows:

Jean started the discussion by underlining the high prevalence of financial scams targeting seniors – so prevalent in fact that he pointed out that they’ve become the “crime of the 21st century”. The first scam he focused on is one of the biggest, namely, one involving scammers posing as Medicare representatives.

“They are calling, purportedly, to verify your information and update your account. But what they’re really trying to do is scam your Medicare numbers so they can file phony claims with Medicare,” Jean explains. The worst part is that these people will sell a single number numerous times to whoever is willing to buy it.

Millions of dollars in phony claims are being done almost on a yearly basis so Jean strongly advises seniors to, “hold tight to those Medicare numbers”. After stressing that point, Jean moved on to the next form of scam, which is done with counterfeit prescriptions.

He underlined the fact that prescriptions tend to be “extraordinarily expensive”, especially in the US, and that’s one of the main reasons why seniors tend to be easily swayed by the promise of saving money on cheaper yet thoroughly fake “alternatives”. That’s also the biggest reason for its growing popularity.

“They’re mostly done on the internet, while some are done on the phone,” Jean points out. “And the danger not only stems from the risk of losing your money. You may also end up taking unsafe substances that can cost you your life, so be careful.” He underscored the importance of always discussing prescriptions you need with your doctor, especially if it’s “out of reach for you.” “Don’t rush out to find that cheaper version of any medication.”

He then proceeded to explain the nature of funeral and cemetery scams. He cautions against buying cemetery plots by phone, mail, or internet. He also discourages pre-purchasing funeral arrangements through those mediums as well. “Go directly to the funeral home of your choice,” he insists.

Scammers who commit this kind of fraud usually call you and offer you pre-planned funeral arrangements or cemetery plots by assuming the identity of a local funeral home and making the offer to you. “There is also this scam of searching the obituaries, and they come up with an issue that will give them a reason to get your credit card information and checking information, and they’ll say they’ll just check it over the phone. Do not do that!”

Other ways scammers take advantage of grieving families include calling you to inform you that your deceased loved one owes them money. “This also happens with phony bills and harassing phone calls and emails. They harass until the family ends up paying for it.”

Jean proceeded to explain about fraudulent anti-aging products. “If it sounds too good to be true, it probably is,” he states matter-of-factly. Afterward, he also identified telemarketing phone scams as another tricky issue for the sheer difficulty to trace them. “They sell off your name, your phone number, or any important contact information, causing you to be scammed again and again.”

Some even go as far as making friends with seniors first and taking advantage of their feelings of loneliness. “Before they know it, their life savings are gone.” Vigilance and a drive to learn are a must to prevent this, as does the other scams he continued to discuss such as fake charity solicits (which falsely appeal to your compassion), internet fraud (which take advantage of seniors’ lack of technical knowledge), and queries about personal information sent via email.

The discussion then proceeded to investment schemes and reverse mortgage scams (wherein they offer to have your property assessed and ask for payment for it. A variation of the latter includes asking you to pay for their home improvements with a reverse mortgage. He went on to warn about lottery frauds where scammers will ask you to pay taxes on your winnings or just take advantage of seniors’ aspirations to become rich and help their loved ones.

It didn’t stop there, though. He also pointed out COVID-related scams (they offer fake COVID-19 benefits), fake warrants on you or your family, Facebook giveaways, and free coupons (that are often too good to be true). All of these scams are intended to get valuable information from you.

The last scam he highlighted was the “devious” Grandparent Scam because it “relies on a grandparent’s love”. It usually entails scammers calling grandparents and they mention a specific name of that person’s grandchild and, from then on, assume his or her identity.

They’ll then start requesting money for various reasons or even ask for personal information such as your social security card number. They’re able to easily convince most grandparents because they appeal to their emotions by presenting a facade such as crying or panicking when making these requests. It’s important not to let your emotions dictate your response to these situations.

Indeed, in the end, active prevention is what counts the most, and this informational initiative will undoubtedly aid immensely in doing just that. Knowledge of how these scams work already goes a long way in steering clear of them.